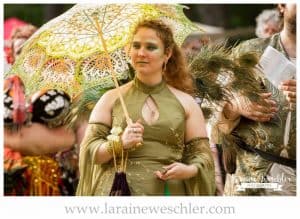 As the Queen of the Summer Court, Titania runs the Market of the Moons Summer Festival along with her husband King Oberon. Titania loves to meet mortals and enchant them with her songs. Although Titania is cheerful and radiant during the daytime, there are rumors of a mysterious lunar fairy who resembles the Queen and appears at the market at night.

As the royal announcer of the Summer Court, Moth is well-versed in courtly etiquette and expects everyone to abide by the rules. But, dealing with Winter fairies is more than Moth had bargained for. As a young fairy (just a little over a century old), Moth rarely gets a chance to attend the Market of the Moons festival and knows very little about mortals. When you meet Moth, you will likely have to answer a variety of questions about mortal life that fairies don’t quite understand.

Wishing she were the advisor to Queen Mab of the Winter Court, Lumi constantly interrupts Aster and tries to tell stories better than him. Though her story-telling skills are not quite up to par, she is adept at dancing and has a great deal of knowledge about the fairy courts. Unfortunately, she can be a bit too eager to please, and often gets herself in trouble with the Queen.

Dislikes: Angering the Queen, Forgetting the End of Stories

As a Pooka, Clover can shapeshift into a rabbit. Clover may have different aspects of a rabbit at different times such as a tail or ears depending on the mood. Clover loves playing games and will try to get involved in any that are going on in the vicinity.

Dislikes: Having to Wait and Loud Noises.

With a love of dancing and spreading flowers, it’s no wonder that Toadstool is excited to join the festival. The only problem is sometimes people don’t see her and she really hates being ignored. Hopefully people will dance and play with her, because her voice can become very shrill when she gets angry.

Dislikes: Getting Left Out, Stepped On, or Ignored. Dropping her hat.

As the King of the Summer Court, Oberon runs the Market of the Moons Summer Festival along with his wife, Queen Titania. Though he often appears serious, Oberon is quick to take part in revelry- enjoying fine wine, dance, and everything the market has to offer. Oberon is an astute King who the other fairies can turn to for the wisdom to solve many problems.

Tiptoe, often called, “Tippy,” is a young, adventurous fairy in the Summer Court. Though Tippy is often exploring distant worlds or fighting pirates, sometimes she can be found at the Market of the Moons recruiting those with courageous hearts, ready to delve into distant lands to bring back baubles and stories for King Oberon and Queen Titania. 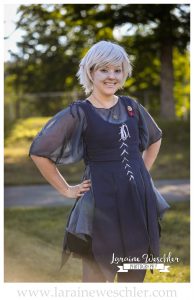 Jack Frost is mentioned in many songs and poems as a tricky fairy who chills mortals simply by touching them. Jack can create snow and ice on command. Jack loves to prank mortals and fairies alike, and may ask you to participate in tricking another fairy at the festival.

Although Thistle used to be a solitary faerie, he has now found many friends in the Spring Court. As a Guille Dhu, Thistle dresses himself in plants and helps strangers who enter the forest. The music and smell of delicious food of the Market of the Moons has pulled Thistle out of the forest.

After helping farmers with their harvest, Fen is ready to kick back with some drinks and good tales. Although Fen has many stories to tell, he is also a good listener. He is also looking forward to hearing some of the music that the festival is known for. 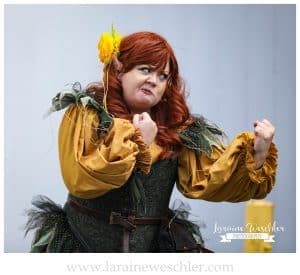 Mustardseed is a noble of the Summer Court. It may be hard to believe that she is the royal advisor to Queen Titania and King Oberon due to her propensity for wine, but she is the perfect fairy to answer questions about her court. Find her at the festival to learn about the Summer Court or if you want to share a good laugh. 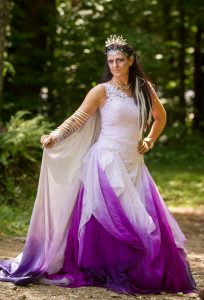 Queen Mab is the powerful, beautiful, and terrifying Queen of the Winter Court. She is the embodiment of all things winter and created her court to balance her warlike nature. Though she never flees from battle, Mab can be generous and kind to those who are loyal to her. 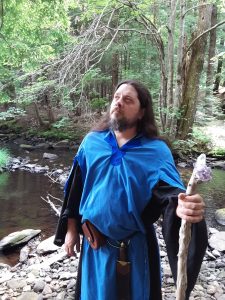 Merlin is a wizard hailing from Camelot. Many believe his powers derived from the magic of fairies. He was once an advisor to King Uther Pendragon, but now he serves Queen Mab. Though his magical powers work in mysterious ways, he may be able to foresee the future. He is adept at brewing potions and telling fortunes.

Grog has a love of drinking contests and getting others to join in the fun. He will never turn down a bet and has a love of all games, especially when a risk is involved. He is excited to join in on the songs at the Market of the Moons. 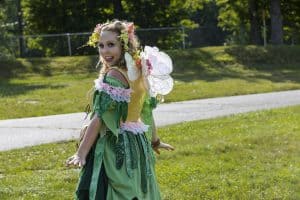 As the royal handmaiden to Queen Titania, Peaceblossom knows just about all of the secrets of the Summer Court. Although she has a happy go lucky appearance, Peaseblossom can be fiercely protective of her Queen and the Summer Court in general. She is a talented seamstress who makes all of the beautiful gowns for her Queen. When you see her at the festival, feel free to ask her about how fairies make their clothing. 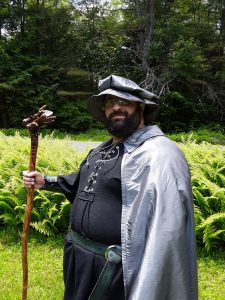 Aster is the royal advisor to Queen Mab of the Winter Court. Though he is quite knowledgeable in all aspects of fairy life, Aster lacks basic information about humans. If you come across him enlightening fairies erroneously about human interactions, feel free to correct him. But, please be polite, he only spends time with mortals once a year during the Market of the Moons

Dislikes: Mab’s Ire, Not Knowing, Being Embarrassed by Scatterbrained Fairies of his Court

Once a student of Merlin’s, Morgan Le Fay is a powerful sorceress with a great deal of magical knowledge. After a falling out with her old teacher, Morgan became an adversary to Merlin, vowing to put an end to his meddling with Kings and Queens. Though she is often portrayed as a villain, she tends to have a good reason for her actions against Merlin and the knights of the round table.

As the royal advisor to King Finvarra and Queen Usna, Hazel is taking a well-deserved break at the Market of the Moons. It has been a long time since any of the Fall Court has been to the Market, and even though she is excited, she also realizes she will have to report her findings back to her King and Queen so they can decide if they would like to attend the festival.

Dislikes: Displeasing her Queen, King Finvarra’s womanizing, and Having to Clean up Messes

Market of the Moons